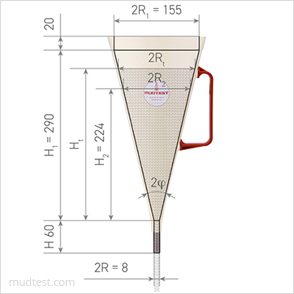 Cement grouts are often used to stabilize weak soils or to reinforce cracked soil masses or prestressing sheaths filling. Grouts injected must have a sufficient viscosity (fluidity) to be able to penetrate these soils. A Marsh funnel may be used to determine the viscosity in the laboratory or at the building site. The funnel consists of a truncated cone leading to a cylindrical nozzle at its lower end. To read the viscosity cement grout is filled into the Marsh cone from the top and the time it takes for the grout to flow out through the nozzle at the bottom is recorded. The shorter this time is the more viscose is the fluid.

According to the French standard NF P18-507:1992-11 the diameter of the nozzle shall be 8mm. All other dimensions were described in in the standards NF P18-357 and NF P18-358 which is no longer valid. Anyhow the MUDTEST Marsh cone is in compliance with both of the above mentioned standards. As the diameter of the Marsh cone nozzle can be selected according to the rheological characteristics of the grouts to be analyzed the Marsh cone with a diameter of 10 mm may be chosen as a more up to date alternative. This cone is described in the European standard EN 445:1996-07

Currently there are no downloads available.